We had a fair amount of bad weather here last week, including a few gusts to 80mph or so.  As usual this brought down a few roof tiles, including two at the back of our own house where we are exposed to northerly gusts from the Irish Sea.  Fortunately, both tiles were still sitting on the roof a few feet from where they should have been although one was sitting precariously half over the guttering, ready to crash down.  My brother’s house too had some roof damage, with one cracked roof tile, and one ridge tile that had come off.

Given that it still gets dark here at this time of year about 5pm, nothing happened to fix these until Saturday afternoon.  My brother dislikes heights, so I was the lucky ‘volunteer’ who got to climb up on his roof to cement the ridge tile back in place and replace the broken tile.  I’m not big on working at height myself, but the job needed to be done, and getting a roofer around here for a small job like this is next to impossible.  The two on our own roof were lower down, so I was able to refit them from the ladder, without even climbing onto the roof.  Small mercies, and all that!

Then there is the commute.  Thursday’s work traffic was no worse than normal on my way into Belfast.  The return trip was however, in a completely different league.  About 3pm, someone in the office reported that a lorry had shed its load on the M2, (the main motorway going to the north and West out of the city).  As a result, three lanes were closed.  I didn’t pay much attention to this because that is not the direction I travel and my leaving time was still a couple of hours away.

At five o’clock, the city centre traffic was still completely stationary in all directions.  It seems that a fender bender where someone lost patience and tried to change lane was adding to the lack of flow. Worse yet, one of the glider buses (pictured), had tried to do a U turn to take a different route, but instead had got stuck on a traffic island because of their exceptionally large turning circle and was then blocking the whole road in both directions.  Of course, I didn’t know all this when I joined the fray. 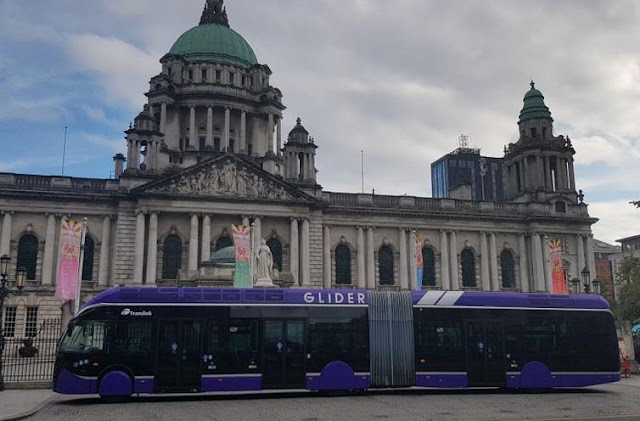 My route out of town takes me down Chichester Street, which once upon a time boasted three traffic lanes. Now it has only two (one of which is a bus lane), because some traffic planner in their infinite wisdom seems to have decided that only making driving more hassle than getting a bus will get drivers out of their cars and onto public transport.   There is a flaw in this argument.  When the traffic jams in Belfast, as it does increasingly frequently, the buses get stuck too.

I made it to Chichester Street easily enough and since the bus lane, (which motorcycles are allowed to use), was packed solidly with buses going nowhere, I was filtering between them and the car lane until a peeved car driver decided to pull over a little to block my path.  Thanks mate!!  Yet, in moving over in the foot or so that he had to the car in front, he also opened up a small gap behind him which I was able to manoeuver the bike into.  My problem then was that I didn’t have enough room to make the turn to the other side of his car, well, not without performing a 16 point turn.  All was not lost though.  The pavement was clear, so I simply used that for a few feet instead until I was past the car.  Naughty I know, but not dangerous, and in those circumstances, I hope you all think it forgivable?

After that, I easily made the next traffic lights, and from there zig-zagged through the melee of tin cans that had only made it part of the way over the junction to a nice clear bus lane that no busses could reach.  From there I was out of the town in minutes.

Yet another day when commuting by bike was a damned good thing.  What I cannot understand is why don’t more people do it?

N.B. Coming in this morning there was a broken down car near Seahill, and a broken down van just before the Sydenham Bypass, so while it is cold out there, it is still another good day to be on a bike. 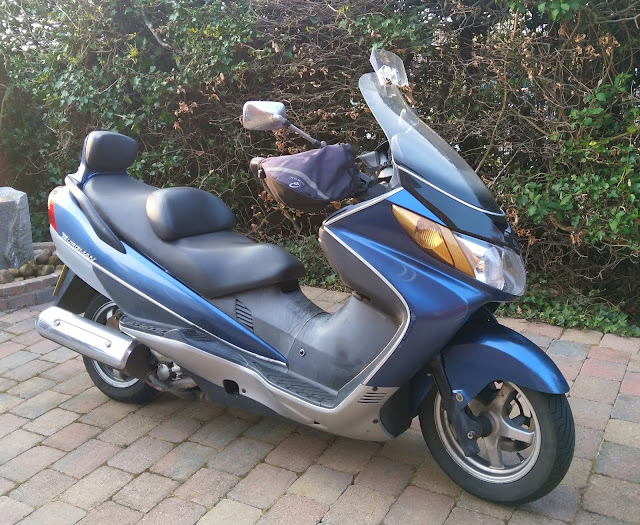