Showing posts from February, 2019
Show All

Let’s face it, when you are buying second hand it pays to be cautious and to look for faults that the buyer may not have declared.   I have no problem with this, although I do try to be as honest as I can when selling anything.   What I do have a problem with are undisclosed problems that would be dangerous, but which would be impossible to find on any inspection without both prior knowledge of what to look for, and disassembly of the item being bought. Old and new sprockets from the Funduro.  The gearbox output shaft should be a good fit in the splines shown on the new sprocket on the right.  Instead its splines wore quickly to almost non existence. If you have read my last two motorcycle related posts here, you will have followed the tale of me buying and fixing up an old 1994 BMW F650 Funduro for winter transport.   You will also have read of the numerous faults that these bikes are afflicted with and the ones that I suffered.   I have no doubt that if BMW had produc
2 comments
Read more

I bought a vampire motorcycle! 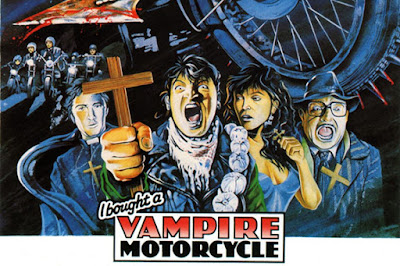 Those of you with long memories may remember the movie, where a possessed Norton Commando periodically struck down anyone within range.   The BMW Funduro mentioned in the last Motorcycle story here developed similar tendencies.   I extolled its virtues as bike with decent power and good handling all for the price of a BSA Bantam.   But while I was using the bike, a number of design flaws haunted my daily commute, but the last one beat them all. For those who don’t know, the Funduro was a BMW designed (and branded) motorcycle, built in Italy by Aprilia, using an Austrian Rotax engine.   They were made from 1994 to 2000, with a revision in 1996 that addressed the major fault discussed in this story. The BMW Funduro, as bought The previous owner of my 1994 Funduro had left it unused under a cover in his garden for a couple of years, so I always knew that it needed work to make it roadworthy.   As usual, I completely underestimated what would be involved in fixing a 20 od
3 comments
Read more

I still hold to my comments published in my first Brexit post (see: https://oldandireland.blogspot.com/2018/11/brexit-dirty-word-in-any-european.html ).   But still the debacle rolls on.   Frankly, nearly 3 years on from the referendum, the whole shambles is becoming downright embarrassing.   I have used the picture below on my first post, but it is worth repeating.     So a few more points.   Good old Teresa is still sticking fast to her no second vote stance, despite the current shambles.   I know that a small majority voted leave, but really, how much worse is it to be governed by Brussels than by the current occupants of Westminster, especially after they have proved themselves so incapable of running anything over the last few years?   Here in good old ‘Norn Iron’, we have the additional joy of having politicians that have been absent from Stormont for years but who are still getting paid!   It’s nice to know that all the important issues they are supposed to deal
Post a Comment
Read more
More posts