My father would have celebrated his 100th birthday yesterday, all be it in lockdown, had he made it past his 57th year.  He had cancer, and had been ill for a number of years before eventually succumbing to it.  He had complained of back pain for a few years, when suddenly, or so it seemed to me, he started stumbling, and was very soon confined to a wheelchair.  Only at this point was the cancer diagnosed.  A man of his generation; when healthy he was a strict disciplinarian who was listened to but never questioned.  He was a small business owner too when we were very young, so we saw very little of him except on Sundays, since he worked long hours.  Even on Sundays, a strict Presbyterianism left a gulf between him and young kids who wanted a weekend of action and excitement.


Since he was nursed by my mother when ill, all four of us kids were suddenly released from that strict discipline, and given lots of time and little supervision.  Our reaction to that, and against all the teachings we were brought up with and which appeared, to me at least, to have failed so spectacularly, must have added a lot of worry to my extra busy and already stressed mother.  I did try to make up for that thoughtlessness towards her in later years. 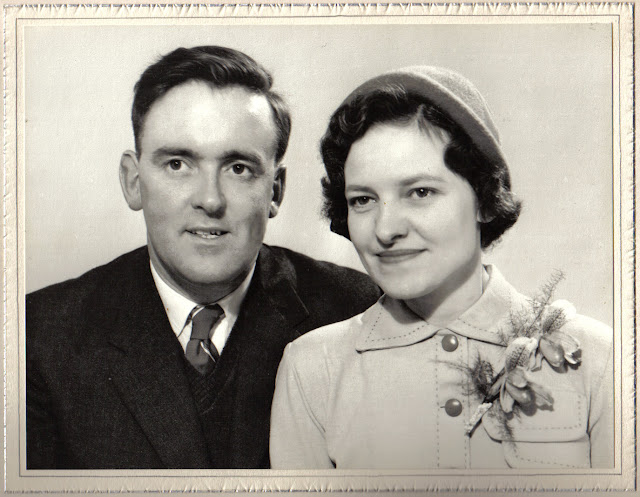 My parents, on their wedding day.

I suppose he was full of pain killers and other drugs during his illness?  He seemed to shrink.  Certainly, when ill, he talked very little, at least when I was there helping Mum lift him in or out of bed etc.  Looking back, we kids tended to ignore him as much as possible.  His decline was certainly very difficult to watch.  Only later, when properly an adult, did I really think about just how difficult it must have been for both him and Mum.  For us kids, escape was within easy reach on the nearby shore line, where we swam and fished like in any normal childhood with never a thought for the trials and tribulations of home.  I must have been a hateful child.


Still, his death took me (and probably all of us), years to deal with.  Even now, when I have to start to think of him as having been a young man, there are many regrets in me.  In truth, I never knew him, and there is now a great hole in me where the stories of his past, or really knowing what he felt and thought about the world should reside.  The reconciliation that I can only wish we could have made as adults now will never come, and many of the mistakes that I have made in life may have been minimised by a little parental wisdom that was not there.


I’m told I look like him.  As I get older, I can see approximations of him in me too.  Hopefully these are the better parts, without that period stiff upper lip.  There is an old Luka Bloom song called ‘The Man is Alive’ that I love (https://www.youtube.com/watch?v=Hpr7qj2cDtE), and it’s words are true: “the man is alive in me”.