As mentioned last time, when rebuilding the top end of my R75/6 the replacement heads that I had for it had a few problems.

The heads are from an R75/7, so are a straight fit onto my bike because I already have modified the  valve gear to a later specification than that originally fitted to my series 6 bike.  I have no idea of the mileage these heads have covered, so they were stripped for inspection and cleaned before anything was done with them.  I have a small lever type clock gauge which I used to check the valve guides for wear.  These at least were well within tolerance, so we had a good start.

Next the valves.  Both inlet valves looked good and a light lap in with fine paste produced a good seating surface.  The exhaust valves were a different story.  They appeared to have been seating on a knife edge thin ring around the valve (see the before and after picture below).  When running my finger nail across this, the nail actually clicked into a thin groove worn into the seat.  What I could not understand was how such a narrow seat could have happened?

It appeared to me that the valve was sitting on the top of the seat rather than on an area matched to the 45 degree angle of the valve seat surface.  I can think of no way that this could have happened through wear, although I'm sure that there may be more knowledgeable people out there who could perhaps provide an explanation?  Please excuse my extremely crude cross section drawing below, and I will try to explain my thinking. 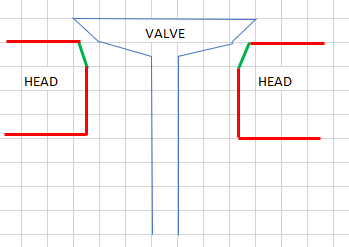 As you can see in the cross section, the valve seating surface is shown in green, but it is not cut to the same 45 degree angle as the valve itself.  If the valve pictured moved down onto the seat, it would sit on a thin knife edge, causing the groove seen on the old exhaust valves.  I can see no way for this to be caused by wear, so can only conclude that the seat has been like this ever since it left the factory?  Feel free to prove me wrong on this; I am open to other suggestions.

The fix is very simple; the seats needed to be correctly cut at a 45 degree angle to match the valve.  I bought a valve seat cutter set on line, and indeed, a few minutes with an appropriately sized cutter, and a quick lap in with grinding paste produced a useable result as seen in the photo of the valves. 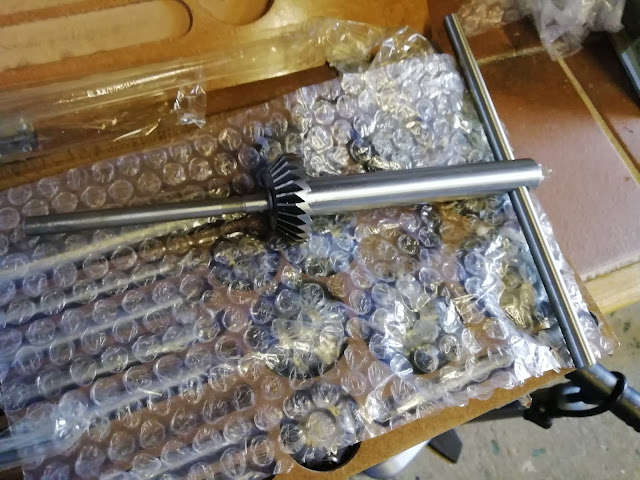 The valve seat cutter.
Buying the cutters and waiting for delivery caused yet another delay in the project, but I can now do this job for myself should I ever need to again.  After sorting the seats, the rest of the assembly was straightforward, with new springs etc being used.
So, what do you think?  Did BMW simply miss a process in the 1970's when these heads were first built, or have I missed something?  I certainly would not have liked to have owned the bike these heads were originally on.  It could not have run well. 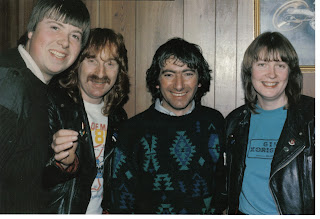